Watching the world go by... 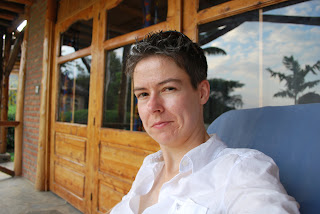 This is what a very relaxed Debs looks like! This was taken on the Sunday afternoon of my trip when I was staying at the beautiful Paradis Malahide at Rubona just 5km away from the border lakeside town of Gisenyi.
The day before I’d taken a bus to Gisenyi at 4.30pm. I’d hoped to leave earlier in the day but missed the boat with tickets. The bus company’s office was rather chaotic, but one of the mechanics was a decent spud and got me sorted onto the right bus. Watching him as I waited for the bus he was obviously the joker of the outfit, winding his workmates up and full of banter, but at the same time getting the job done. It was nice to see a new(er) set of tyres going on to the bus I ended up travelling on!
The bus-ride was about 3 hours and a bit from Kigali to Gisenyi. The driver was a bit of a maniac, but then I think most drivers in Rwanda are maniacs. The white lines in the middle of the road are only really for decoration which is a bit hair-raising when you’re flying round a hairpin bend on the wrong side of the road and another vehicle is coming the other way. It was humbling watching people pushing bicycles carrying large water containers up the steep hills and I also spotted a cyclist hanging on to the back of a Primus lorry (Primus is the local brew, nothing to do with camping stoves) to hitch a ride up a steep stretch. There were a few ‘holy scamoly’ moments – one in particular when we nearly ran over a blind man who stepped onto the road – but other than that it was a great opportunity to soak up the phenomenal scenery as we listened to the driver’s reggae music CD. I’d read of Rwanda being described as ‘Land of a Thousand Hills’ and it’s very apt, except there must be thousands upon thousands of hills and mountains. The route took us within view of Volcanoes National Park where there are 5 volcanoes in the Virunga Mountain range and I managed to spot 3 of them, their summits shrouded in some cloud, even though the sun had just about set. These mountains are home to the mountain gorilla and the area is famous for the pioneering research of Dian Fossey.
We made it to Gisenyi around 7.30pm when it was pitch dark and I got a taxi to the hotel. I was taken outside to my room – a rustic chalet from where I could hear the water lapping at the shore as well as the crickets. I was slightly freaked out by the presence of some geckos and one rather large spider in the room, but I guess there are unexpected advantages to sleeping under a mosquito net. Once I got myself organised I got some eats in the hotel restaurant and chilled out by the open fire. 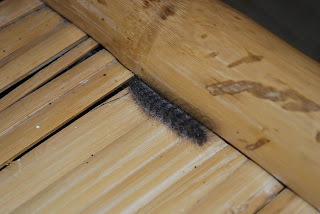 This little guy dropped in to see me, I have to confess he made me jump when he poked his head out of my bag!
Imagine my jaw-dropping delight when I woke up the next morning and looked out to see this view… 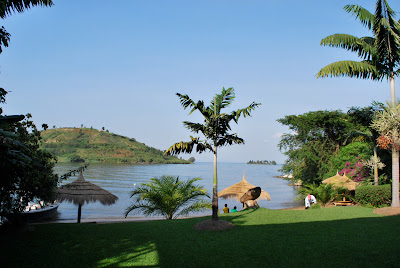 Absolutely stunning. I ate breakfast al fresco right by the water and listened to the sounds of fishermen singing as they brought in their catch. As it was a Sunday I could also hear singing from a local church drift across the lake. Whether they had one very long service or several back-to-back I couldn’t quite figure out but the joyful singing seemed to keep going from early in the morning right into the afternoon. 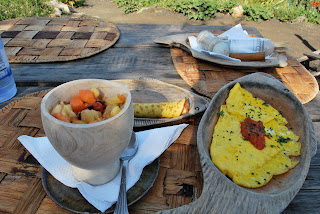 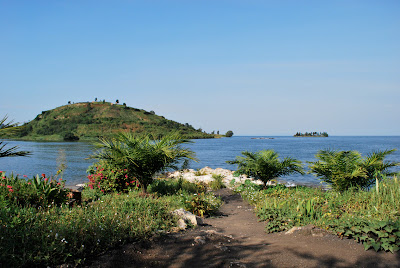 After breakfast I decided to head into Gisenyi to reserve my return bus ticket so that I wouldn’t get caught out again. My taxi-driver was a lovely man and we chatted in a mixture of faltering French (on my part) and faltering English (on his part though his English was still better than my French!) I took a wander round the busy market then wandered into a local church (turned out to be Presbyterian – seems like I couldn’t get away from my roots on this trip) where lots of singing seemed to be happening. The building was packed and I was made very welcome and shown to a space on one of the benches. In the short time I was there, four different choirs got up to sing – first of all someone would start off and the choir would make their way up to the front then they would start into their song properly with the church band trying to catch up and the keyboard person desperately trying to find the right key (once or twice they never managed to sync with the choir, but kept going nonetheless).  Everything was in Kinyarwanda so I hadn’t a clue what was going on. To be honest there were similarities with some churches at home – there was a minister in robes at the front with four others who all looked a bit stern. Some of the folks in the congregation looked a bit bored, like they were going through the motions, it seemed as if some of that austere Scottish Presbyterianism had filtered across time-zones and continents. After 20 minutes or so I wandered back to the market to meet the taxi-driver – if I’d wanted I could have walked to the border-post as Goma in the Democratic Republic of Congo is just a couple of kilometres away, but the beach at the hotel was calling my name.
So the rest of the day I enjoyed the sheer and unadulterated bliss of not having anything to do bar read, enjoy the scenery and watch the world go by. I had grilled tilapia (lake fish) and chips for lunch – Rwandans make great fish and chips! 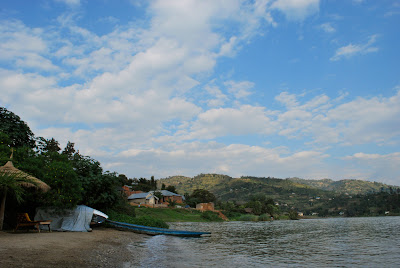 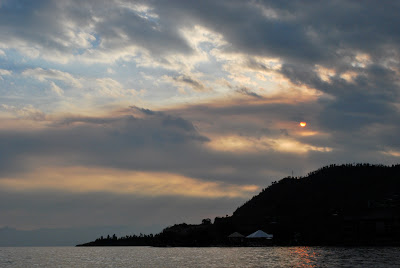 Later in the evening when I had dinner, the hotel guests were treated to an entertaining display by a group of traditional Intore dancers and drummers. Two of the dancers wore long blond wigs – impressive enough to make Miss Piggy jealous – which is meant to be made from monkey hair. Gee whizz, being a tourist is so tough eh? 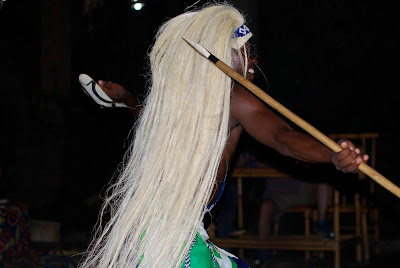 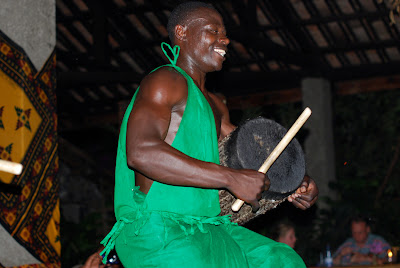 Email ThisBlogThis!Share to TwitterShare to FacebookShare to Pinterest
Labels: Gisenye

Debs Erwin
Youth Work Manager at Public Achievement, Northern Ireland, where I co-ordinate the Away from Violence programme.