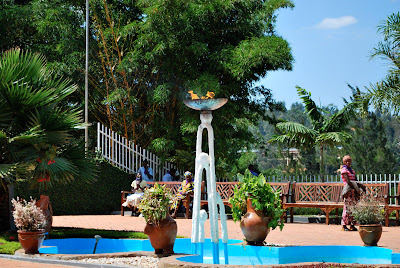 I mentioned briefly my visit to Kigali Genocide Memorial and at the time I needed a bit more space to process what I’d seen. Before I set off to Rwanda I’d been earnestly picking up books on the country (see menu on the left) to try and understand its culture and what happened in ’94. I’d also previously watched Hotel Rwanda and Shooting Dogs. That’s all very well – shocking, moving, horrifying etc – but when you’re in situ, it’s a bit different.
It’s obvious that they’ve put a lot of thought into creating this memorial centre. There are numerous symbols which carry meaning and significance, the gardens have been beautifully created to convey something of what Rwanda has gone through – like the cactus garden symbolising the pain experienced by its people – and to reflect the nation’s hope for the future. The rose garden celebrates the diversity of the people of Rwanda and thus remembers the diversity of the genocide’s victims. The central exhibition’s panels are in 3 languages with Kinyarwanda largest, then French, then English and I liked the fact that this centre is somewhere for the Rwandese to come and reflect on their past, it’s not exclusive to tourists. 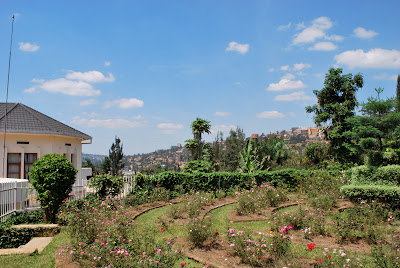 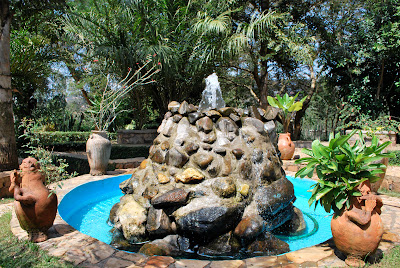 When I arrived at the memorial centre, a large crowd of people were proceeding into the central exhibition. Many of them were wearing purple scarves round their necks. In the days following this visit I noticed the recurring theme of purple at various memorial sites across the country and I’m guessing this is because in many cultures purple represents death and in some traditions it represents repentance. Initially I thought there was some kind of memorial service happening but later I realised it was simply a large group visit to the memorial. It seemed to be a group of mixed ages and I’m guessing that they were relatives of victims, or perhaps survivors, or orphans. I decided to wander first through the gardens outside the exhibition centre and purchased an audio guide so I could get descriptions for what I was seeing. 250,000 people are buried on this site and it was hard to comprehend the scale of the mass graves. They’ve started work on a wall of names of those buried there, which will take some time to complete. 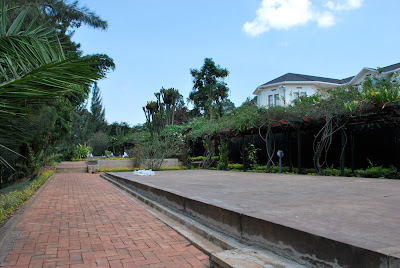 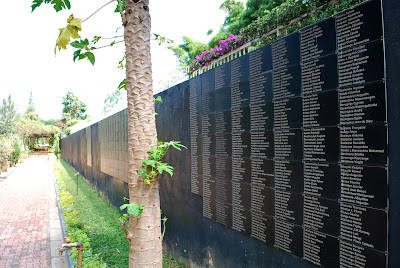 When I had wandered through most of the gardens and was closer to the exhibition centre, I heard a woman keening – the sound of her mournful cries were penetrating and I found myself working hard to keep it together. Then I noticed a man lying down on a mattress with one of the centre’s attendants comforting him. Later when I was inside the exhibition centre I noticed a large pile of these mattresses – it’s obviously a regular occurrence for people to collapse with the weight of their pain and grief. It made me realise that although 17 years have passed since the genocide, the pain and grief is very real, raw and present.
Part of me felt like I was intruding. Here I was, this white foreigner, a citizen of the international community which only stepped in when it was too late to the bloodbath that was Rwanda. I know nothing of what it’s like to have watched your family and community murdered in front of you, the tendons on my ankles were not slashed to prevent me running away, I was not gang raped, I didn’t watch my baby be flung up into the air to fall smashed into the ground…this and worse was the experience of so many and words fail to describe the depth of the horrors of the 100 days of the genocide. And so I felt ashamed to show my emotions as if I was intruding on the pain and grief of others.
But later as I was reflecting more on what I had seen and experienced, I felt that if I believe in one human race, in a common humanity, then it is right for me to share the pain of others. ‘Rejoice with those who rejoice and mourn with those who mourn’ – I think it’s right for the whole world to lament for the loss experienced in Rwanda, and in other places – Sri Lanka is an even more current example. People lost their humanity during the genocide and perhaps we need to keep focussing on our common humanity so that things like this never happen again. Nothing should ever become so big a problem that we lose our respect for each other’s humanity. Trite? Maybe. The international community essentially didn’t believe that a ‘small’ African conflict mattered, that the deaths of Africans were worth risking the lives of international peacekeepers – they (and we) lost sight of our common humanity.
I’m glad I went to the Kigali Genocide Memorial. It’s possibly more ‘sanitised’ than some of the other memorials in the country with its displays of skulls or bones in glass cabinets but to be honest its no less disturbing particularly when you notice the obvious signs of blows to the head. I guess the only thing that doesn’t sit overly well with me is the recurring phrase, ‘Never Again’. The reason that skulls, bones, clothes, pictures etc of victims, and in some places preserved bodies, are on display is so that what happened in 1994 is never forgotten and never repeated. But from what I can gather, despite commitment to Rwandan unity and building one nation, there is still a lot of division between Hutus and Tutsis. The phrase, ‘Never Again’, although very important, just seems to be lacking in a positive commitment to building a shared future together by working through the problems of the past. That’s just my take for what it’s worth (which isn’t very much). On a personal note I guess my resolve to do the work I do has been strengthened and that can only be a good thing. 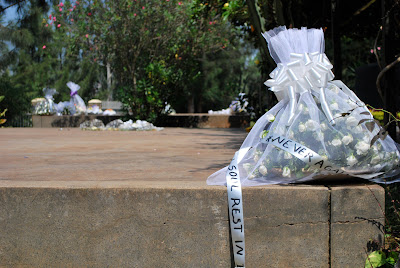 Email ThisBlogThis!Share to TwitterShare to FacebookShare to Pinterest
Labels: Kigali

Debs Erwin
Youth Work Manager at Public Achievement, Northern Ireland, where I co-ordinate the Away from Violence programme.